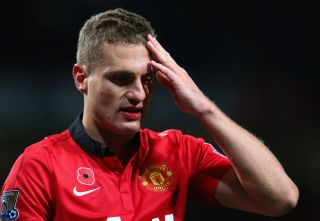 The 32-year-old's Old Trafford deal expires at the end of the season, and he has yet to be offered a new one.

Vidic has managed 17 appearances so far this season, having been restricted to 23 and 11 in each of the last two seasons due to injuries.

The former Spartak Moscow man's agent Silvano Martina is confident that his client will have no shortage of options, but is seemingly resigned to seeing him depart the Premier League champions.

"Vidic is a very good player and will have no trouble finding a new club," he told Radio CRC.

"For the time being we are remaining calm.

"However, at the moment, I would rule out an extension with Manchester United."

Napoli have been linked with a January move for Vidic and, while Martina revealed an approach from the Serie A club had not been made, he is impressed by the elevated reputation the Stadio San Paolo outfit have forged for themselves in recent years.

"Vidic, given his contract situation, has several teams looking at him," Martina added.

"Napoli? At the moment there has been no contact.

"Thanks to the management of (president Aurelio) De Laurentiis and (sporting director Riccardo) Bigon, they are one of the best clubs in Europe."