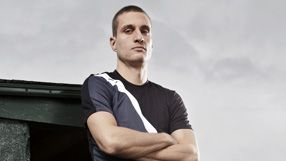 Ferguson turned 71 last week and rumours persist that this - his 26th season at Old Trafford - will be his last, despite the Scot insisting last week he would remain beyond the end of the current campaign.

Speaking exclusively to FourFourTwo, Vidic said he had no idea who would be able to fill the void when Ferguson does eventually leave.

"It is tough to say, the way the club is built is on stability, some of [the players] have been with Ferguson for 10 years," Vidic explained.

"We still want to keep stability. It will be a tough place to be and it will be a big challenge for the club and for the [new] manager to sit in that chair, but he will have support from the club and the fans and [we will] give him all he needs to do well.

"Who it will be, I do not know - the manager is still doing well, so we don’t need to think about that now."

However, Vidic did express an interest in moving into management himself when he retires from playing.

"I would like to be a coach or a manager one day," the Serb explained, "but you never know, you change decisions. I have had some coaching lessons and I am interested in that, but I am still a footballer."