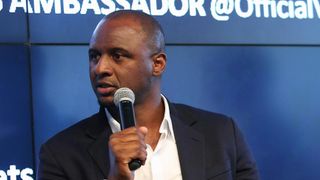 The former midfielder, who played for Arsenal, Juventus, Inter and Manchester City in a trophy-laden career, was officially unveiled as the MLS franchise's new head coach Wednesday.

The Frenchman moved into coaching after retiring at Manchester City and has been learning his trade at the Premier League giants, where he has been in charge of the under-21 team.

His appointment as NYCFC boss marks his first foray into senior coaching, and the 39-year-old says he wants to contribute to the club's unique identity.

Vieira said he would work closely with sporting director Claudio Reyna to better understand the rules in MLS.

"[MLS] is completely different and this is the reason why I need to have Claudio next to me to get me more into details of the rules in this country," Vieira said. "The last few weeks have been good. I learned a lot. In the draft, it was interesting meeting other coaches in the league, exchanging, talking about the positive and negative of the league.

"It has been a really long learning process for me, but it was really good."

Reyna said he was delighted to be able to work with the two-time Premier League winner.

"I think it is important to have a great leader, someone who commands respect," Reyna said. "We have instantly in Patrick the presence of that, as soon as he walks into the room."

Vieira said the club, which endured a mixed debut season as it finished with just 10 wins, was his best option to make the leap into his first senior role.

"We are in an industry where results matter and results are really important," he continued. "We want to win and we want to win trophies by playing the right way."