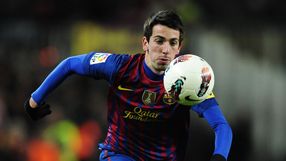 Spain striker Villa has struggled to hold down a regular place in the side this season after breaking his leg at the Club World Cup at the end of 2011 and has been out for several weeks with a muscle strain.

Cuenca, a Spain Under-21 international who broke into the side under previous coach Pep Guardiola, had surgery on the cartilage in his right knee at the end of May 2012.

With the two players back in action, all 25 members of Barca's first team squad trained together for the first time this season, the club said in a statement on their website.

The Catalan club suffered their first La Liga defeat of the campaign at Real Sociedad on Saturday and face a stiff task in their next match, a King's Cup quarter-final second leg at Malaga on Thursday.

Last week's first leg at the Nou Camp ended 2-2 and only a win will be good enough for the holders if they are to secure a probable semi-final clash with great rivals Real Madrid.

"The only thing we can do is analyse the situation and turn it around," midfielder Andres Iniesta told a pre-training news conference on Monday.

"We are not thinking about getting knocked out but focusing on training to go into the match in the best possible shape.