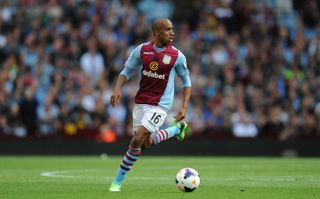 Delph has started each of Villa's three games this season, having forced his way into Lambert's plans during the last campaign.

The former Leeds United man made 24 appearances for Villa in 2012-13 after struggling with injuries following his move from Elland Road in 2009.

With Delph having played a part in Villa's late-season flourish last time out, and then retaining a starting spot, Lambert feels he can make the step up to international level.

"I’ll let England worry about England, my job is to worry about Fabian and Aston Villa, but the way he’s playing you just don’t know," he told The Birmingham Mail.

"I'm pretty sure there’s more to come from him. The way he has started the season is great. If we keep him fit and healthy, the way he is playing, it’s up to himself how far he goes.

"It won’t be for a lack of trying because he has got a great attitude."

Delph was brought to Villa Park by Martin O'Neill in August 2009 after a season that saw him feature 44 times for Leeds, scoring six goals.

While Lambert was not the man responsible for the 23-year-old's signature, the Scot was aware of his talent.

"I knew about his potential at Leeds because I’d seen him there," he continued.

"He’s playing really well at the minute. I think he's only a young lad still, so if he can keep injury-free he’s got a big, big future."

Delph has represented his country four times at under-21 level.