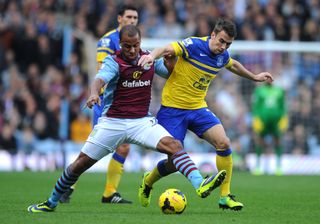 The Birmingham-born frontman suffered a recurrence of an ankle injury in the 2-0 home defeat against Everton last weekend.

And Villa boss Paul Lambert will monitor Agbonlahor's fitness ahead of the clash at Upton Park on Saturday.

"He's got a knock on that ankle that was giving him a bit of a problem before so we have to wait and see," Lambert told Sky Sports News.

"Everybody else seems not too bad."

Villa have failed to score in their last three top-flight games and Scotsman Lambert is eager to get back on track in the capital.

He added: "We go on Saturday against West Ham, we'll go down there and it'll be a tough game but we're certainly tough enough to go and win.

"I've only been there once, last year, and it's a good atmosphere so I'm looking forward to it."

Another player who may not be in the squad to face Sam Allardyce's side is winger Marc Albrighton.

Championship side Wigan Athletic are hoping to secure a loan deal for the former England Under-21 international ahead of their clash with QPR on Wednesday night.

Wigan manager Owen Coyle said: "We are certainly getting closer to that happening. We might be able to get Marc involved (against Rangers)."