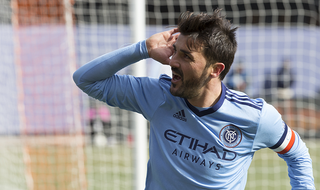 The Spanish veteran became New York City's first player in 2014, with Vieira following him across the pond to replace Jason Kreis in January 2016.

And Villa has been impressed with the Frenchman’s knowledge and work ethic since he took over after a spell working at Manchester City, NYCFC’s sister club.

Speaking in the November 2017 issue of FourFourTwo, out now, Villa says: "He's got a great knowledge and understanding of the game, and a great personality too.

"Everybody likes him. He always gives the players lots of information before matches and he'll study the games all of the time.

"He is at the club seven days a week, even on a Sunday. He's got a great future as a manager in front of him and I believe he'll be very successful for many years to come.”

Thierry Henry shocked fans by using the subway en route to New York Red Bulls training, and the Spaniard tells FFT he too prefers to avoid the Big Apple traffic.

For 35-year-old Villa, though, adjusting to life in New York was straightforward thanks to the time he's spent in major cities such as Barcelona and Madrid.

"I do it all the time! Within the city I never use a car – it makes no sense because the traffic is really bad. I'll always hop on the subway.

"My family loves it here and I love it too, but I came here to play football first and foremost. It's a metropolis but I've always played in large cities, so it wasn't too big an adjustment."

Read the full interview with David Villa in the November 2017 issue of FourFourTwo magazine, which focuses on Zinedine Zidane's quest for domination after leading Real Madrid to back-to-back Champions League triumphs. Also this month, we go behind the scenes at the FIFA Interactive World Cup to find out just how serious video games have got, speak to Huddersfield manager David Wagner about the Terriers' miraculous return to the top flight, learn about the evolution of fan tribes, visit Ireland to watch a Scottish cup tie, go One-on-One with Edwin van der Sar, and get clued up about Expected Goals. Order a copy today here, and then subscribe!