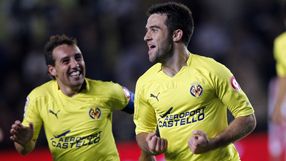 Third-placed Villarreal have played some of the best football in Spain this season and should provide Barcelona with one of their toughest tests in La Liga, when they visit the Nou Camp on Saturday.

"It's usual to see Real and Barca fighting for the title but this year there isn't such a difference compared to third place," Villarreal's Brazilian striker Nilmar told the club website.

"We have (an attacking) style of play that we shouldn't change. Everyone will be watching this game and if we can do things well people will start to appreciate our work."

Champions Barca are two points ahead of Villarreal after ten matches, and one short of unbeaten leaders Real Madrid, who they host in the first 'clasico' of the season a week on Monday.

They will be without suspended Gerard Pique and injured Gabriel Milito at the back, which could open the door for a youth team player or perhaps France full back Eric Abidal to partner Carles Puyol in the centre of defence.

Real coach Jose Mourinho was sent off during their midweek victory over Real Murcia in the King's Cup and will have to watch from the stands when they visit Sporting Gijon on Sunday.

"The second (yellow card) was absolutely fair, without a doubt. The next time I see him (the referee) I will apologise," Mourinho said of the incident in an interview with radio station Cadena Ser on Friday.

Valencia will be without first-choice goalkeeper Cesar Sanchez when Getafe visit on Monday. The 39-year-old has been ruled out for two weeks with a calf strain.

Unai Emery's side have slipped off the pace down to fifth after taking only one point from their last four league outings.

Atletico Madrid host Osasuna on Saturday and will be hoping Uruguay striker Diego Forlan starts scoring goals again soon. The FIFA Ballon d'Or candidate last found the back of the net at the beginning of September.

Argentine striker Sergio Aguero and goalkeeper David de Gea have been nursing injuries but are expected to play.

New Malaga coach Manuel Pellegrini won his first game in charge 3-2 against Hercules in the King's Cup on Thursday, and now sets his sights on dragging them off the foot of the standings when promoted Levante visit on Sunday.

"Considering how little time we have had together I am pleased with how well the team have assimilated everything. Now it is important to get the three points on Sunday," the Chilean told reporters.