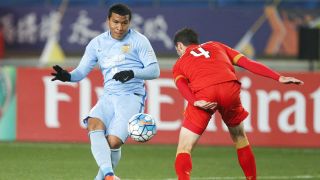 Jiangsu Suning say they have reached an agreement with Villarreal for the transfer of Roger Martinez to the LaLiga club.

The 23-year-old Colombia international will move to Estadio de la Ceramica for a reported fee of €15million.

"Jiangsu Suning's Roger Martinez will be leaving for Villarreal after a transfer agreement was reached between the two parties," a statement released by the Chinese Super League club said.

"We would like to thank Martinez for every goal that he scored for us, and we wish him every success in a new environment and bigger stage to fulfil his potential."

Martinez joined Jiangsu from Racing Club in 2016 and had been tipped to move eventually to Inter, who are owned by Suning Holdings Group.

The forward scored 17 goals in 30 CSL appearances during his time in China.

Martinez is likely to have been signed as a replacement for Cedric Bakambu, who is expected to join Beijing Guoan in a €40m deal this month.