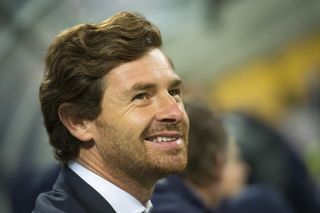 Goals from Jan Vertonghen and Jermain Defoe helped Tottenham to a 2-0 win over Sheriff in Moldova on Thursday, but the scoreline was not a true reflection of the match.

Ismail Isa had a first-half effort ruled out for offside, while the hosts also wasted several chances against their Premier League opponents.

Tottenham did enough, though, with the win giving them three in as many matches in Group K, putting them on the verge of qualification.

And Villas-Boas - who set his side the goal of qualifying in the fourth match of the group, which will be at home to Sheriff next month – was pleased with their fighting spirit.

"We had to work hard for this win," he said. "We went through a moment of the game where we could have suffered. The second goal gave us stability.

"We have nine points now which is a completely different position to where we were last year.

"The objective was to secure qualification over the course of these two games (against Sheriff) and this result ensures we still have that possibility."

Defoe's deflected strike was his sixth of the current Europa League campaign, and his 22nd in continental football for the club.

That saw him equal the record of goals in Europe for Tottenham, set by Martin Chivers, and Villas-Boas reserved special praise for the forward, and for winger Aaron Lennon, who is on the comeback trail following a foot injury.

"(For Jermain to equal the record) it's a great achievement," he added. "We'll celebrate even more if he overtakes the record.

"It was a great performance from Azza (Lennon). It was excellent to see him back out there."

Tottenham will host Hull City in the Premier League on Sunday as they return to White Hart Lane for the first time since their shock 3-0 defeat to West Ham earlier this month.