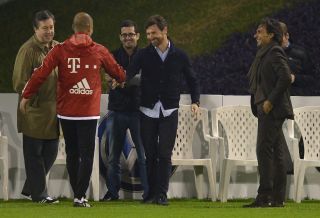 The Portuguese had two spells in the Premier League, managing Chelsea and Tottenham before being sacked by the latter in December.

He was reported to be in line for a swift return to management at West Brom but the former Porto coach is eager to take his time before accepting a new challenge.

"I have decided to take a break," he told Abendzeitung Munich.

"I want to learn a bit and refresh my batteries, but I can't imagine a life without football.

Villas-Boas was speaking while on a visit to Bayern Munich's mid-season training camp, where he took time out to praise the work done by Bayern coach Pep Guardiola.

The 36-year-old stated that Guardiola's impact at former club Barcelona and with the German champions had altered football globally.

"His legacy is already huge, he is highly valued by every coach in the world. It is a honour for me to look over his shoulder," Villas-Boas continued.

"He has changed football. The way it should be played - he has opened the world's eyes.

"If you look how the top teams in Europe are playing, you see the inspiration he gave with Barcelona."