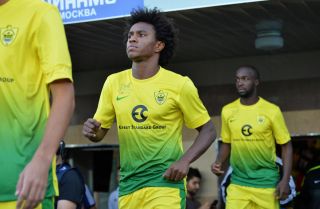 The Brazilian forward has been told by owner Suleiman Kerimov that he can leave Anzhi if the right bid comes in, with the billionaire looking to sell some of his assets to shrink their large wage bill.

Villas-Boas was keen to bring Willian to England when he was at Shakhtar Donetsk last season but said he had not yet placed a bid for the 25-year-old.

"This is a player who I have spoken about in the past, not very long ago," Villas-Boas said.

"He is a player who I appreciate and he belongs to them and I respect them so I wouldn't like to extend myself too much."

Liverpool has missed out on several expensive targets in the off-season and despite being so close to signing Willian, they are wary of missing out because of the vast options the player has.

It was clear after Tottenham's 1-0 win at Crystal Palace that the team needs further strengthening despite the £60million they have already splurged this transfer window.

Spurs have already broken their transfer record twice with the signings of midfielder Paulinho and striker Roberto Soldado but Villas-Boas said they could still dip into the transfer market before the September 2 deadline.

"We haven't finished our business yet," he said.

"We have a very, very good squad and we have done most of our activity in the market, but we are looking further on that.

"There is a possibility (of new signings), yes."

The ongoing transfer saga of Real Madrid target Gareth Bale continues with the Portuguese tactician not willing to say that the Welsh star has played his last game for Tottenham.

"He is a player who has had a light training session today and hopefully if everything goes well the player will be involved and I can give you further news in the future," Villas-Boas said.

"He is in our Europa League squad, but he is not available (for Thursday's game against Dinamo Tbilisi) because he is injured."