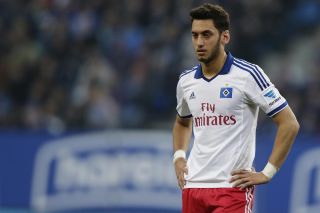 The form of the 20-year-old Turkey international has been one of few plus points for Hamburg this season, scoring 11 times in 32 league appearances.

However, the highly-rated prospect confirmed earlier this week that he "definitely" wants to leave the Imtech Arena after securing the club's top-flight status thanks to victory over Greuther Furth on away goals, stating: "My outlook for the coming season I can see, crystal clear - being at Bayer Leverkusen."

Voller, Leverkusen's sporting director, feels the midfielder can blossom at the BayArena rather than risk potentially becoming a squad player at Bayern Munich or Borussia Dortmund.

"It's no secret. We would love to have him...but there are other interested parties," the former Germany international told Bild.

"It is clear that Hamburg decides - and we (will) accept any decision.

"We are not Bayern or Dortmund but young players like Levin Oztunali and Julian Brandt or now, Josip Drmic and Hakan Calhanoglu, see that they can play with us. We have earned this reputation."

While Voller is hopeful that Calhanoglu will move to Leverkusen, he insists the club are in good shape even if he decides against a switch.

"With Wendell and Josip Drmic we have already made two top transfers," he explained.

"Especially with Drmic it was important to be in there early because we are convinced that he will have a strong World Cup for Switzerland."