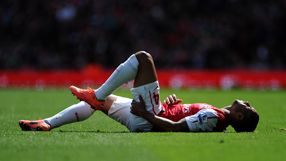 The winger pulled up in the second half at The Emirates and, despite trying to play on, was forced to depart.

"It looks like a serious hamstring," manager Arsene Wenger said. "First we assessed the hamstring, he wanted to go on and stay on the pitch and I think he should have gone off straight away because the second time it was a real hamstring [injury].

"I think now for him it will be tough to come back before the end of the season. It is usually 21 days [minimum]."

Walcott is expected to be part of England's Euro 2012 squad for Poland and Ukraine and Wenger said he expected his player to recover in time for the June 8-July 1 championship.

"He should be OK to play for England - he just will have a good rest. But I don't think he will be ready to play for us."

Arsenal, who are trying to secure a top-four finish in the Premier League, have three matches left this season.