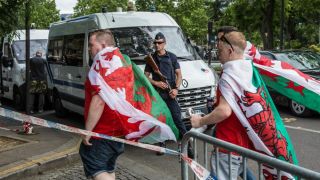 UEFA has confirmed that kick-off for Wales' Euro 2016 quarter-final with Belgium will remain on schedule despite travel chaos on the Eurotunnel on Friday.

Some trains leaving the UK were hit by delays of up to five hours as a result of "cancellations due to technical problems", according to a tweet posted by Eurotunnel, despite three additional trains being brought into service to help alleviate congestion.

A number of supporters are concerned that they will miss the match in Lille, which is due to kick off at 21.00CET, but UEFA is confident that the majority of fans travelling with tickets for the game will arrive in time.

"UEFA is aware of the current delays in the Eurotunnel and has gathered further information from the Welsh FA, local authorities and the tunnel operator," a statement read.

"It appears that the vast majority of fans with tickets will arrive on time at the stadium in Lille. The match is therefore scheduled to go ahead as planned with a kick-off time of 21.00 CET.

"UEFA will continue to closely monitor any developments around this situation."