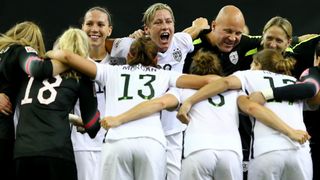 United States are peaking heading into the Women's World Cup final against Japan, according to captain Abby Wambach and goalkeeper Hope Solo.

A repeat of the 2011 decider in Germany - where the Japanese won on penalties - is on the cards in Vancouver on Sunday.

Jill Ellis' side were 2-0 winners over Germany in the semi-finals on Tuesday, before Japan edged England 2-1 in a thriller a day later.

New York-born forward Wambach, approaching her 249th international cap, said the most impressive aspect of the Americans' campaign was their spread of performers.

"Before the game Jill told us that big players rise for big moments and I think that's kind of been exemplary for not only own back line but Carli Lloyd thought out this tournament," Wambach said.

"I also think that the depth of this team is the symbolism of that big player, it's the 23.

"It's the 23 of us and Kelley O'Hara coming off the bench and scoring her first international goal in a World Cup semi-final is not only crazy in my mind but I literally couldn't be happier for her, even if it were me scoring the goal.

"I think overall as a team it was our best team performance last night and I think you get a sense that this team is really coming together, we are really starting to peak and that has been our goal."

Solo, who has been the rock in the US' streak of 513 minutes without concession, reiterated Wambach.

"With each day we get better and better and you want to peak at the right time and I think that's what we are doing to a tee," the 33-year-old said.