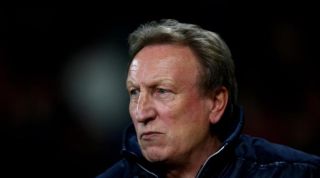 Dwight Gayle, Joe Ledley and Mile Jedinak got the goals as Palace came back from Rickie Lambert's second-minute strike to pick up a first win in six Premier League outings.

The result took Palace out of the bottom three, much to the delight of their boss - who returned to the top job at Selhurst Park in August following Tony Pulis' shock departure.

"That was the best performance since I have come back to the club," Warnock said after a rain-lashed encounter. "I thought the weather helped. Our crowd were fantastic

"The first goal was disappointing but you can score too early sometimes. We created some good chances. I'm pleased to get three goals.

"I thought we got rewarded for playing good football. We looked really organised and difficult to break down."

Despite boasting three different goalscorers, there was little doubt that Yannick Bolasie was the star of the show as he tormented Liverpool all day.

Warnock added of the lively winger: "I wouldn't want to play against Bolasie. He doesn't know what he's going to do next, so how can the full-back?"