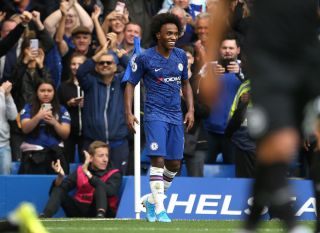 Willian has called on Chelsea to be more ruthless in front of goal after they squandered a host of chances against Brighton.

The Blues had 17 shots on goal in the first half but still trooped in goalless at the break.

They needed a Jorginho penalty, after Adam Webster tripped Mason Mount, to finally break the deadlock before Willian struck late on to secure a first home league win of the season.

“We needed it,” the Brazilian told the club’s website.

“We have been working hard every day, every game and this time we finally got the result, got the three points at home and we have to carry on. We have to continue in the same way.

“The game could have been 3-0 or 4-0. In the first half we created a lot of chances and I think we have to be more clinical.

“We cannot miss chances like this and we have to now think about the next game.

“The clean sheet means we get confidence now. We will have more confidence in the next games and we have to carry on the same way.

“If we want to stay at the top of the table we have to win points and win games, so we go for it. We have to keep pushing and working hard, and I think we can do that.”

But Burn admitted: “I thought Chelsea were the better team on the day and we didn’t do what we do as well as we have done in other games.

“They had some good chances, but we were frustrated with the penalty because I didn’t think it was at the time.

“I could have scored with that header as well, so it was very frustrating. We are creating chances and we have to take them, which is what the top teams do.”