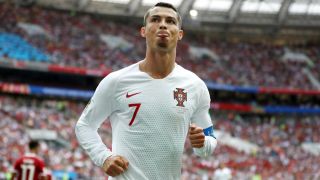 Cristiano Ronaldo showed off some of his vast array of skills in his first outdoor training session with his new Juventus team-mates.

The Portugal forward, a €112million signing from Real Madrid, met up with the rest of the senior squad for the first time on Monday for fitness work following his post-World Cup holiday.

The 33-year-old was out on the Vinovo pitches on Tuesday, though, where he looked most unlike a player who has not kicked a ball in anger since Portugal exited the World Cup at the last-16 stage on June 30.

Ronaldo produced some juggling skills for the cameras before taking part in a short crossbar challenge and long-range shooting exercise.

Not wanting to be outdone after Rodrigo Bentancur fired the ball into the top corner, Ronaldo sent a shot off the woodwork, raced onto the rebound and shouldered it into the net.

The former Manchester United star is expected to make his competitive debut when Juve begin their Serie A title defence against Chievo on August 18.

Hard yards  Concentration  Crossbar Challenge Just another day of  with our boys at the JTC!July 31, 2018