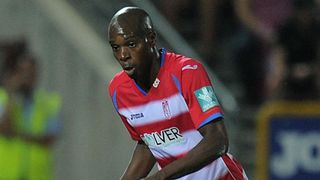 The 27-year-old arrives from Udinese, although he has spent the past six seasons on loan at Granada in Spain and never made an appearance for the Serie A outfit.

The two clubs, along with Watford, are owned by the Pozzo family and Nyom's transfer to Vicarage Road represents the latest in a string of deals struck between the Italians' teams over the years.

Born in France, the right-back's professional career started out at Arles-Avignon before his fleeting visit to Udinese.

Nyom became an important member of the first team at Granada as they rose through the divisions fron Segunda Division B to La Liga, making more than 200 appearances for the club.

Nyom is Watford's seventh signing of the season, with Matej Vydra having also arrived on a permanent deal from Udinese.