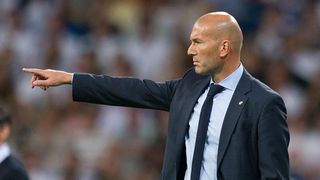 Zinedine Zidane felt Real Madrid paid the price for not scoring first at the Santiago Bernabeu as they had to settle for a 1-1 draw at home against Tottenham.

Having already hit the post in the early stages, the home side fell behind in the 28th minute when defender Raphael Varane inadvertently diverted a cross from the right into his own net.

The two-time reigning European champions equalised before half-time thanks to a Cristiano Ronaldo penalty but failed to find a way past an inspired Hugo Lloris after the break.

The Tottenham goalkeeper made reactionary saves to deny Ronaldo and Karim Benzema from putting Madrid ahead, leaving Zidane to reflect on what might have been in the battle of the top two in Group H.

"We aren’t happy as we were at home and we always want to win, but we had our chances," Zidane told Antena 3.

"There were two great keepers and we also hit the post. They defended and worked well, it was a logical result.

"The problem is always about getting an early goal. If you do that, then great but conceding allows them to take a step back. They know how to defend well.

"In the end we drew and we'll try to win at Wembley. We're level on seven points and we'll see how we go next time. We are growing consistently, and while we've started not the best in the league we are improving."

The two clubs - who remain level on seven points in a group that also features Borussia Dortmund and APOEL - meet again on November 1.

Here are some of the best photos from this evening's draw against .October 17, 2017