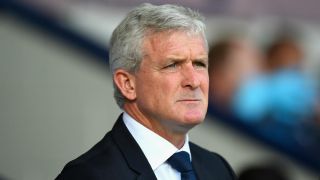 Stoke City manager Mark Hughes said that Newcastle United's tentative approach to a 2-1 defeat of the Potters was a mark of respect, telling his players they must expect teams to sit back against them this season.

Christian Atsu put in-form Newcastle ahead after 19 minutes before Xherdan Shaqiri levelled the match in the second half at St James' Park.

Newcastle captain Jamaal Lascelles converted Matt Ritchie's corner to make it 2-1 after 68 minutes and Hughes said his defenders made a mistake to allow the hosts to grab a winning goal.

"We were a bit loose in terms of the accuracy of our passing and our general play but Newcastle looked to soak up pressure and hit us on the break. We had to be vigilant.

"Towards the end of the game we just made a mistake on the set play for them to take the lead for the second time. That was a disappointment after working really hard to get back on level terms.

"We had two really good chances towards the end that really we should have taken. Mame Biram Diouf would normally knock the header in and Eric Maxim Choupo-Moting would usually despatch the opportunity he had.

"That was a different test for us today. We're going to get teams that are going to respect the ability we've got and sit back and try and soak up the pressure and we've got to be good enough to break teams down. Today we weren't quite there in terms of creativity in the last third."

Hughes, whose side have failed to win any of their last three Premier League matches, also called for his players to improve their final ball.

"We lacked the accuracy to release players in good areas to get clear-cut opportunities," he said.

"We're a good side and we can knock it around but in key moments you've got to be really clinical and make sure you give the right weight of pass to allow players to have those clear-cut chances."

Hughes added that club captain Ryan Shawcross wouldn't recover from a damaged ligament in his back in time to face Bristol City in the EFL Cup on Tuesday, but he was optimistic the defender would return for the visit of Chelsea in the Premier League on Saturday.

"He won't be fit for Tuesday, I wouldn't have thought," said Hughes. "We'll try and get him ready for the weekend.

"If it's not next week it will definitely be the week after."