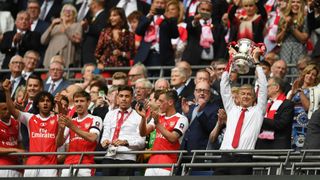 Arsene Wenger refused to let his excitement of winning the FA Cup for a record seventh time derail the plan to announce what his future holds after the club's board meeting on Tuesday, but he did claim Arsenal are only a couple of signings short of being Premier League contenders.

Arsenal produced a battling display to beat Chelsea 2-1 at Wembley on Saturday, with Alexis Sanchez and Aaron Ramsey getting the goals, the latter coming just after Diego Costa's equaliser.

Wenger's future dominated the build-up and was again a hot topic at full-time, with the Frenchman's current deal expiring at the end of the season and many supporters calling for him to end his 21-year tenure.

However, he refused to let the heat of the moment rush him into an announcement, reiterating that a decision will be made on Tuesday or Wednesday.

Speaking to BBC Sport, Wenger said: "I have always been very clear. We have a board meeting on Tuesday, so I think on Wednesday things will be clearer.

Wenger was unsurprisingly elated with the performance that made him the most successful FA Cup manager with seven final wins, and he insisted that his team are only a few players short of being capable of winning the Premier League title.

"I think we were outstanding from first minute," he added. "You notice the team has suffered, but we are united, we responded.

"We showed strength, unity and played spectacular football. I've said before that this team will win the championship with one or two buys."