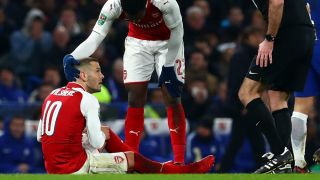 Jack Wilshere will be assessed ahead of Arsenal's weekend trip to Bournemouth after the midfielder sustained an ankle injury in the EFL Cup semi-final at Stamford Bridge.

Arsene Wenger's side held out for a 0-0 draw in Wednesday's first leg but lacked the early control Wilshere gave to their performance when he limped off before the hour.

The England international has battled back into contention at Emirates Stadium this season, having been plagued by persistent ankle worries over recent years.

This setback does not appear to be as serious for the 26-year-old but Wenger told reporters he had suffered a sprain.

"He has an ankle sprain and the first look at it was not too bad, but of course for Sunday I think he will be short," said the Frenchman, who watched the match from the press seats as he continued to serve a touchline ban.

"I do not know how long he will be out. It is a shame to lose him when he is in such good form and it was by blocking the shot that turned his ankle. It's his good ankle so I am quite positive."

Wenger confirmed on Sky Sports that Francis Coquelin is on the verge of a move to Valencia and hopes Aaron Ramsey (hamstring) will soon be available to help with his midfield shortfall.

"We have five big injures and hopefully we will get some back," he said.

"I believe the first to come back will be Ramsey and that is good because it is an area where we are quite short at the moment."

Arsenal survived a late VAR review when Danny Welbeck challenged Cesc Fabregas in his own box and, even though referee Martin Atkinson's original decision of no foul was upheld, Wenger admitted to some nervous moments in the stands.

"I didn't see the replay on television. They made that decision so we had to respect it," he said.

"I was worried that it took too much time. I thought maybe there were not sure that it was not a penalty and were looking at it again and again."