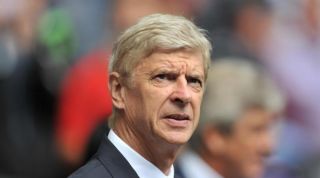 There is pressure aplenty on Wenger to bolster his forward line with Olivier Giroud's long-term absence having further depleted his sparse options.

Calls for a new recruit will only grow, too, following a disappointing 1-1 Premier League draw at Leicester City on Sunday.

And with the clock ticking on the transfer window, which closes on Monday evening, Wenger is hoping to bolster his squad.

"It is finding the personnel that is the problem," Wenger told Sky Sports after watching Leonardo Ulloa cancel out Alexis Sanchez's opener to earn Leicester a point.

"We are open and are working on it but let's not fool ourselves into thinking that every time you don't win you need to buy a new player.

"It is not because you buy one player that you win. We want to and we are hoping to.

"The pressure to buy is always there every time you do not win a game. We are disappointed not to get the three points but let's not put it all down to that."

Wenger admitted that it was a lack of cutting edge that cost his side at the King Power Stadium.

He added: "We did not create enough clear-cut chances and they fought very hard.

"We missed a few opportunities but I think we lacked some creativity and sharpness.

"We have had a tough two weeks with three away games; it is not an excuse but we are a bit jaded.

"We wanted so much to win it that we lost caution and we were more open to counter-attacks and we could have lost it."