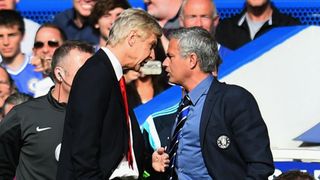 Arsenal manager Arsene Wenger does not feel Chelsea's struggles or their decision to part company with Jose Mourinho will make this weekend's Premier League meeting any less important.

Wenger and Mourinho shared a feisty rivalry, which manifested itself both on the touchline and during media conferences, before the Portuguese left Stamford Bridge in December amid a disastrous title defence.

Chelsea sit 14th in the Premier League while Wenger's men lead the way, but the Frenchman expects a typically hard-fought contest at the Emirates Stadium.

Asked whether Mourinho's absence would take any sting out of the fixture, Wenger said: "No. I look at the quality of the players on the pitch and never at who is on the bench.

"You look at the characteristics of the team and the players. We don't analyse the character of the manager on the other side.

Mourinho has never lost a competitive game against Wenger and previously mocked his fellow manager's lack of a league title since 2004 when he described the Arsenal boss as a "specialist in failure".

Interim boss Guus Hiddink has suggested that relegation remains a threat for Chelsea and it was put to Wenger that such a fate would in fact make the Stamford Bridge outfit specialists in failure.

But Wenger joked: "Look, I see where you want to take me, but I am not ready to travel.

"They are not in the title race, no, but they are direct rivals because of the quality of their team and I think this season is exceptional for them.

"They will be back. Nobody can predict [what has happened to Chelsea], but it can happen to anyone.

"Confidence can go quickly. There has been bad luck and the league is more difficult than ever, so once you lack confidence it can happen to anyone.

"I think [Hiddink] has gone a bit overboard. I don't believe that. If you look purely at maths [then maybe], but the team has too much potential."