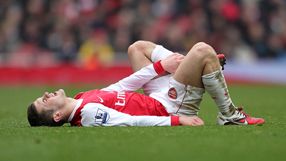 The 20-year-old has not played a minute of first-team football in 2011/12 due to an ongoing ankle complaint, but he was expected to be fit before the end of the current campaign and available for England selection.

However, the youngster, who has won five caps for his country, has now had his dreams dashed.

"Jack Wilshere will not play again this season, and will not play at the Euros. He is making slow progress. He will not be ready. The FA know about Jack's injury. He is devastated."

"My ankle is good, I just have a few niggles and having been out so long I will not be fit enough for the Euros!

"I hope England can do well and bring home the cup! I will be watching and cheering the boys on like a proper england fan!

"Thanks for all your support! Means a lot!"

Wilshere initially injured his ankle in a tackle that won England a penalty in a Euro 2012 qualifier against Switzerland at Wembley last June.

He recovered in time to participate in the Gunners' pre-season schedule, but later suffered a stress fracture to the same ankle that required surgery.

England, who remain without a permanent manager or captain heading to Poland and Ukraine, are already missing star striker Wayne Rooney for the first two group games against France and Sweden through suspension.

Fellow forward Darren Bent is also facing a race against time to be fit for the trip to Eastern Europe after damaging ankle ligaments in February.