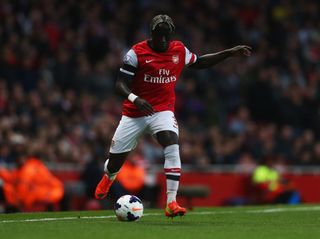 Sagna's current deal at the Emirates Stadium will expire at the end of the season, meaning he can depart the club on a free transfer if fresh terms are not agreed.

The France international has been linked with a move to Premier League rivals Manchester City and Serie A outfit Inter.

Wenger has confirmed that negotiations have stalled and only the 31-year-old can decide his future.

"Talks are not progressing," he said ahead of Monday's encounter with Newcastle United. "The ball is not in our court anymore and he has to come back to us (with an answer)."

While Sagna could be heading for the exit door, Wenger was also asked about incomings and the possibility of a deal for striker Loic Remy, who is currently on loan at Newcastle from QPR.

But Wenger refused to be drawn on whether a move was imminent, adding: "He is a good striker. But we are focused on the end of the season, not on strikers."

Midfielder Abou Diaby will not take part on Monday. The Frenchman played 45 minutes of a reserve fixture in midweek after 13 months on the sidelines due to a cruciate ligament injury.

However, his return to the first team has been curtailed by a groin problem.

"He (Diaby) had a little groin problem after the game so will not be available on Monday," Wenger said.