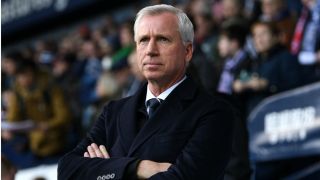 Alan Pardew would not be drawn on the uncertainty regarding his position as West Brom manager after a turbulent week for the club ended in an FA Cup exit at the hands of Southampton.

After four senior players - Gareth Barry, Jonny Evans, Boaz Myhill and Jake Livermore – apologised for breaching curfew in an incident during the club's Barcelona training camp, Pardew's side, who sit bottom of the Premier League, had hit something of a low ebb heading into Saturday's clash.

Southampton were quick to take advantage - Wesley Hoedt putting them ahead inside 11 minutes - and although West Brom fought back in the second half, Dusan Tadic's effort ensured that Salomon Rondon's stunner proved a mere consolation.

And with West Brom owner Guochuan Lai having dismissed chairman John Williams and chief executive Martin Goodman, Pardew has acknowledged that his future is out of his hands after the 2-1 home loss.

"It's not a decision for me," Pardew, whose side are seven points from Premier League safety, told BBC Sport.

"But in terms of the character the team showed, and the fans, who were magnificent and showed loyalty, we have to show our loyalty and get a result in the league.

"I didn't think we were great in the first half after a week of not what you would have really wished for, but we pushed Southampton in the second half.

"It's been difficult but in terms of experience on the pitch and attitude and reaction, I was pleased. It was a difficult day for the players, we gave a good account of ourselves and we are slightly unfortunate."

For Southampton, a spot in the quarter-finals presents a welcome distraction from their own troubles in the top-flight, with Mauricio Pellegrino's side occupying 18th place.

"It was important for us for many reasons, we go to the next round in one game," Pellegrino said after his side held on to avoid a replay.

"And we wanted to improve the spirit ahead of the next Premier League game. West Brom were really strong in direct play, and they are very good from set plays. It was a really tight game, but we were really focused.

"Now the most important thing is to believe in our job and our way."