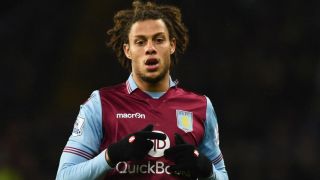 Villa remain adrift at the foot of the Premier League table and are 10 points from safety heading into this weekend's fixtures, but an upturn in recent form has helped restore some confidence around Villa Park.

Tuesday's 2-0 FA Cup replay win over Wycombe Wanderers extended Villa's unbeaten run to four games in all competitions, while they have only conceded two goals during that spell.

And Gestede - who scored the only goal in September's League Cup win over city rivals Birmingham City - says belief is growing within the Villa squad ahead of the trip to The Hawthorns.

"I think it's coming at a good time. We have confidence," he told AVTV. "They beat us at home [1-0 in September]. Now we're eager to beat them away - and get the three points and keep our run going.

"These derby matches are important games for the fans and for the club. We know that.

"It's easier when you start picking up results. It helps you believe. Now we're doing that so our confidence is getting stronger and stronger."

West Brom have themselves enjoyed improved form in recent weeks, with wins over Stoke City and Newcastle United - plus a draw away to Chelsea - helping to lift them above the champions into 13th in the table.

Tony Pulis' side were beaten 3-0 by Southampton last weekend, but put that result behind them with a 1-0 FA Cup win away at Bristol City on Tuesday, sealed courtesy of Salomon Rondon's first goal since October.

The £12million man admits his price tag has affected him this season following his August move from Zenit, but is confident he can now enjoy a solid run of form as West Brom aim for the top half of the table against a team who have not beaten them in their last five league visits.

"It's very difficult with the price tag. West Brom paid a lot of money for me and I have a reputation [for goals], so I have to keep working," he said, as quoted by the Express and Star.

"The English league is difficult. The last game we lost at Southampton, but this is the way. If we do well, we will win every game.

"It will be difficult for them, as Villa are down and we need to win at home to take the three points."

West Brom will be without Chris Brunt, who suffered a calf injury against Bristol City, with James Morrison (hamstring) also out and Darren Fletcher (knee) a doubt. Jonas Olsson and Saido Berahino - linked with Newcastle United this week - are both battling to recover from illness.

Adama Traore (broken foot) and Jordan Amavi (knee) are still out for Villa, with Alan Hutton, Leandro Bacuna (both hamstring) and Carlos Sanchez struggling for fitness.