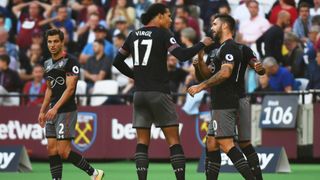 Southampton tore through a sorry West Ham defence to rack up a 3-0 win at London Stadium on Sunday and pile more misery on an embattled Slaven Bilic.

Charlie Austin, Dusan Tadic and James Ward-Prowse got the goals to seal a fourth win in a row in all competitions for Claude Puel's side, who have kept clean sheets in all of those successes.

By some contrast, West Ham have now shipped 14 goals in four Premier League games, despite the hosts siting deep and allowing Southampton the ball in a bid to avoid the sort of first-half collapse they suffered at West Brom last week.

The game lacked any real spark until Austin, against the side who rejected the chance to sign him last year, stylishly converted Ryan Bertrand's cross to prompt boos from the home fans at the half-time whistle.

West Ham applied some pressure early in the second half, but a dreadful lapse in defence allowed Tadic to wrong-foot goalkeeper Adrian and finish into the unguarded net to put Southampton in cruise control and Ward-Prowse capped a thorough beating in stoppage time.

West Ham have now lost five of their six league games and slide into the bottom three. Southampton, meanwhile, are up to ninth.

Simone Zaza saw penalty shouts waved away by referee Jonathan Moss after he was knocked to ground by Cedric Soares, but opportunities were scarce in the early stages as West Ham willingly sat off their opponents.

Neither side was able to fashion an effort on target in a first 40 minutes that were desperately short on quality, but Austin's opening goal was worth the wait.

Bertrand linked up with Dusan Tadic down the Southampton left, after escaping Michail Antonio's attentions, and the full-back cut the ball into the penalty area, where Austin arrived to sweep it into the far corner first time with his left foot.

Southampton twice could have doubled their lead before the break, Adrian denying Nathan Redmond at the near post before Cedric blasted a shot into the side-netting from a similar position.

The Spaniard made a brilliant one-handed stop to deny Tadic from close range shortly after the interval as Southampton continued to threaten a second, but despite a spell of West Ham pressure, Tadic made them pay for more dreadful defending just past the hour mark.

After Winston Reid and Cheikhou Kouyate contrived to lose possession in their own half, Austin played a first-time pass into the space in the West Ham defence, and Tadic dummied superbly to take the ball beyond Adrian before slotting home.

Steven Davis was denied by a last-ditch block from Havard Nordtveit as Southampton sliced through the home defence once more, before West Ham saw further penalty appeals denied as substitute Sofiane Feghouli's goal-bound shot struck the raised arm of Bertrand.

An otherwise subdued Payet arrowed a shot narrowly wide and the indomitable Virgil van Dijk capped a superb display with a timely goalline clearance, but Ward-Prowse added gloss to a fine day for the visitors as he steered a left-foot shot into the net after Angelo Ogbonna deflected Davis' cross invitingly into his path.