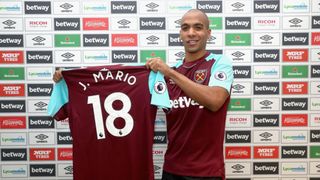 Joao Mario has joined West Ham on loan from Inter until the end of the season, with the Premier League side also reportedly given the option to make the deal permanent.

The Portugal midfielder joined Inter from Sporting CP in August 2016 for a fee estimated to be in the region of €40million.

However, he has failed to live up to the expectations he set in Portugal and with his country as they won Euro 2016, making just five league starts this term.

West Ham manager David Moyes confirmed his side were closing in on Joao Mario's signature on Thursday, acknowledging that his lack of Premier League experience made him something of a gamble.

But the 25-year-old will offer Moyes energy and technical ability in several midfield positions and signs initially until the end of the season, going straight into the squad for Saturday's FA Cup clash with Wigan Athletic.

He will join up with international team-mate Jose Fonte, who Joao Mario says has already explained various aspect of the club to him.

"Jose explained to me a little more about the club and also the song we have, 'I'm Forever Blowing Bubbles', and that it was really important for me to join West Ham," he told the club's official website.

"It's a really historic club with an amazing stadium and amazing players. I am just trying to know a little bit more about the club every day and now I have some time to know more."

Reports in Italy have claimed that a €40m clause has been inserted that could see West Ham sign Joao Mario permanently, although neither club has disclosed it.