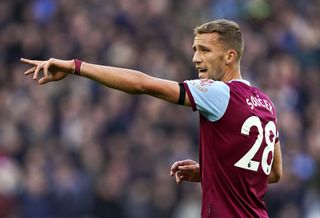 West Ham will be without Tomas Soucek and Ryan Fredericks for the Premier League clash against Southampton on Saturday.

January signing Soucek suffered a hip injury at Liverpool on Monday night and faces three weeks out, while Fredericks had a shoulder operation this week.

Jarrod Bowen could make his full debut after two substitute appearances since his deadline-day switch from Hull.

Kyle Walker-Peters is back in contention for Southampton’s trip to the London Stadium.

The Tottenham loanee has shaken off a calf concern and has trained all week with the south coast club.

Nathan Redmond remains sidelined with a hip injury and could be out of action for another month.