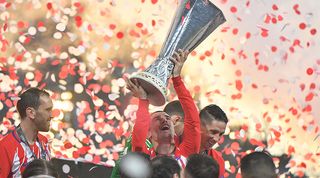 The draw for the quarter-finals of the Europa League will take place at 12pm GMT on Friday in Nyon, Switzerland.

Chelsea have made it there comfortably (to say the least) after an 8-0 aggregate victory over Dynamo Kiev, while Arsenal turned around a 3-1 first-leg defeat by smashing Rennes 3-0 at the Emirates Stadium in the second.

Last season the Gunners reached the semi-finals, only to snatch defeat from the jaws of victory against Atletico Madrid. Chelsea won the competition the last time they played in it, back in 2013.

There is no seeding or country protection at this stage, so Blues and Gunners could potentially meet in the final eight.

NOW READ... Ranked! The 10 best centre-backs in the world