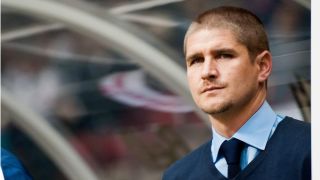 After adding three prospects to his roster in this year’s MLS SuperDraft, Vancouver Whitecaps FC head coach Carl Robinson revealed they are close to adding a new right back for the coming season.

The Blue and White have been in the market for a right-sided defender after trading veteran Steven Beitashour to Canadian rivals Toronto FC this offseason. With Jordan Smith currently the lone natural right-back option on his roster, Robinson confirmed he is nearing a deal to strengthen that area of his back line.

“There’s a possible option that has come up recently, and we’re trying to get that over the line,” Robinson revealed in a conference call following Thursday’s SuperDraft in Baltimore, Maryland. “At the moment, we’re close to agreeing (a deal), but having said that, you never know.”

The former Wales international was equally hopeful about completing the transfer of experienced Costa Rican winger Christian Bolanos in the very near future.

“Talk to me in 24 hours,” Robinson said of Bolanos. “I don’t really want to talk too much about it until we can maybe get that over the line, but we have been linked to him. We do like him, and we’d like to try and bring him to the football club.”

As for Vancouver’s SuperDraft selections, Robinson was delighted to land his top target in Georgetown University defender Cole Seiler with the 16th overall pick.

“We did try to move up a couple of places because the boy we wanted in Cole, we actually thought might go earlier,” he said. “However, it fell into place, so we still ended up getting the guy we wanted. Someone must have been smiling on us.”

Seiler is looking forward to developing his game at the Whitecaps after having a productive meeting with Robinson and his coaching staff at this month’s MLS Player Combine in Florida.

“What I was really looking forward to was being in an environment, where there’s a good connection between the players and the coaches in that the coaches are invested in developing the players, not so much winning and losing,” the 21-year-old said. “In the meeting I had with coach Carl (and the Whitecaps), it definitely seemed like that showed through. I’m very fortunate and blessed, in that regard.”

After selecting Seiler in the first round, the Whitecaps used their second-round picks to add a pair of strikers to their ranks. German youngster Christopher Hellmann was selected 29th overall from Lynn University, while Indiana native Thomas Sanner was picked 36th overall from Princeton University.