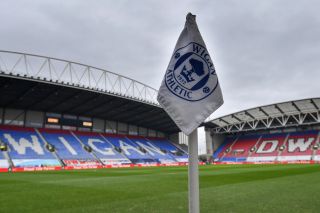 Wigan’s 12-point penalty for entering administration will be applied immediately after Wednesday’s final Sky Bet Championship game against Fulham, but is subject to appeal.

The Latics – who were placed into administration on July 1 – are currently 13th in the Championship, but will find themselves in the relegation zone after 46 games should they fail to beat Fulham because of the 12-point deduction.

Even victory will not be enough should either Charlton or Luton win their final games, and an EFL statement on Monday said the automatic punishment for going into administration will come into force on Wednesday night.

“In the case of Wigan Athletic the 12-point sporting sanction, as a result of the club entering administration, will apply immediately following the end of the game against Fulham but is subject to appeal,” the EFL said.

“In the specific case of Wednesday evening’s final round of Championship matches for season 2019/20, and any potential impact on divisional standings, relegation will be confirmed for the clubs in 22nd, 23rd and 24th positions in the Championship table following the conclusion of those matches and will be subject to the resolution of any ongoing proceedings.”

Wigan have already lodged an appeal against the 12-point deduction, the PA News Agency understands.

The appeal will be heard by an independent disciplinary commission, who will have little time to adjudicate on the matter between the end of this season and the start of the 2020-21 campaign, which is expected to be in mid-September.

“The EFL is committed to announcing any final outcome promptly following notification of the decision by the relevant independent disciplinary commission, giving consideration to the issues raised above and in accordance with its regulations,” the League said.

“Independent disciplinary commissions are well aware of the challenges for any club that is subject to proceedings, and the need for clarity for financial and operational planning purposes, particularly ahead of the summer transfer window opening later this month.

“In addition, there is also the consequential impact to consider on how any decisions may affect other clubs within a division who require the same courtesy to plan with as much certainty as is practically possible.

“Equally, there are the operational pressures this presents the EFL, in areas such as fixture scheduling in the event any decision(s) change a divisional line-up.

“Nevertheless, the primary objective of any Independent disciplinary commission is to deal with cases expeditiously and fairly.”

Wigan were in the Premier League as recently as 2013, winning the FA Cup in the same year.

The club dropped down into League One in 2015 but made an immediate return to the Championship.

Au Yeung’s Next Leader Fund only took formal control of Wigan June 4, yet just 20 days later his legal representatives in the UK set in motion the process to appoint administrators.

This was confirmed on July 1 with Yeung saying the coronavirus pandemic “fundamentally undermined” his ability to fund the club and left him with no option but to put it in administration.

Sheffield Wednesday and Derby have both been charged with financial misconduct relating to the sale and leaseback of their respective stadiums, accusations both clubs deny, and their cases will also be heard by independent disciplinary commissions.