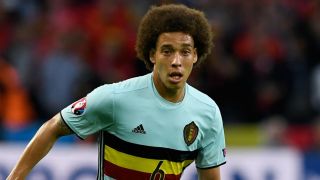 Tianjin Quanjian and Belgium midfielder Axel Witsel insisted he had no plans to leave China just yet.

Witsel, 28, starred for Zenit before making the move to the Chinese Super League (CSL) in January 2017.

Amid reports he could leave Tianjin for a return to Europe, Witsel said he was going nowhere.

"I am a player from Tianjin Quanjian and none of these rumours would affect me," he told Tianjin TV.

"I love Quanjian and the city of Tianjin and I am willing to stay here. I will spare no effort in getting better results for Tianjin Quanjian.

"The head coach [Paulo Sousa] tells me I am the core player of the team. And I will be charged with taking the squad to a new level.

"I'll strive to meet his demands."