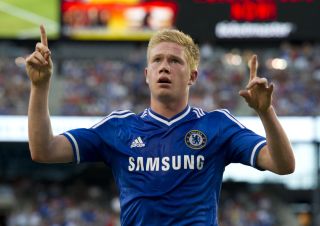 The 22-year-old, who spent last season in the Bundesliga with Werder Bremen, has struggled for opportunities with the London side this season, starting just two of their opening seven Premier League games.

And with manager Jose Mourinho previously saying that he was unhappy with the player's performance, Wolfsburg will hope the that lure of first-team football will persuade him to join them.

"We as a club have given our signal of interest in the services of Kevin De Bruyne," Allofs told Sky Deutschland.

"This was done over the summer when it became obvious that he would be returning to Chelsea.

"Kevin De Bruyne is no first team regular at this point in time. We will definitely consider what is going on with him."

De Bruyne is currently with the Belgium squad in Croatia, where they are preparing for their crucial FIFA World Cup qualifier on Friday.