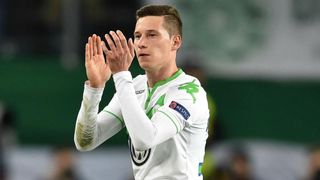 Wolfsburg sporting director Klaus Allofs has stressed Julian Draxler will not leave the club amid reports Arsenal are keeping a close eye on the Germany international.

Draxler impressed for Germany at Euro 2016 and his good performances have not gone unnoticed elsewhere, with Arsenal believed to be keen to lure him away from the Bundesliga side.

Nevertheless, Wolfsburg are adamant the 22-year-old, who has a contract until June 2020, is not for sale.

"Draxler will 100 per cent certain be wearing the Wolfsburg jersey in the new season," Allofs told Sport1.

"Julian will stay at Wolfsburg. There is not even any discussion about it.

"We will simply not sell Julian. We were not open to a transfer before the Euros, not during the tournament, and neither are we now.

"There will be speculation, but our stance is clear."

Allofs also had his say on the situation of Andre Schurrle, who has been heavily linked with a move to Borussia Dortmund, and admitted the former Chelsea man is open to a transfer.

"We don't want to sell him. We think he can be a key figure here after his development last season and want him to stay here. But Andre has told us that Dortmund's interest has made him think about his future.

"We have to deal with this situation. But nothing has happened for now. It is not unlikely that Andre will stay at Wolfsburg as well."