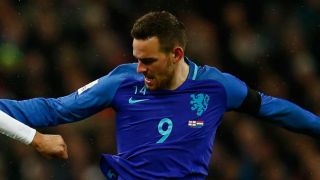 Wolfsburg sporting director Klaus Allofs has confirmed the Bundesliga side are interested in signing Netherlands international Vincent Janssen, but has acknowledged they face stiff competition in the race for the AZ striker's signature.

Janssen's good performances have not gone unnoticed elsewhere with Tottenham and Everton also believed to be keeping a close eye on the prolific attacker.

"We have a number of options for the position of striker," Allofs told Kicker.

"We have already held talks with Janssen.

"But we are not the only team that are interested in signing him."

With Wolfsburg looking to bring on Janssen ahead of next season, Max Kruse appears to be on his way out after a difficult 2015-16 campaign – his first with the club since joining from Borussia Monchengladbach.

"Max has told us that he would like to move elsewhere," Allofs added.

"But we will definitely not let him go on the cheap."