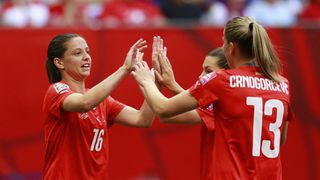 Switzerland became the second team to score 10 goals in a game at the 2015 Women's World Cup, while Sweden held United States to tighten up Group D.

Fabienne Humm and Ramona Bachmann both scored hat-tricks for the Swiss, as they triumphed 10-1 over Ecuador, who have now conceded 16 goals in two matches.

Elsewhere, Sweden claimed a 0-0 draw against USA with both sides left to rue their inaccuracy after combining for 21 shots but just two on target - both to the Americans.

That result saw Group D - quickly proving itself to be the tournament's 'group of death' - remain close ahead of the final pair of matches, with the USA (4 points) just ahead of Australia (3), the Swedes (2) and Nigeria (1).

With this year being the first time FIFA's premier women's event included 24 teams, there had been concerns before the tournament that there would be a wide disparity in quality in some matches.

In general that has not been the case but Martina Voss-Tecklenburg's Switzerland joined Germany, who crushed Ivory Coast 10-0 last week, in notching 10 goals in a game on Friday.

In Vancouver, Switzerland only led 2-0 at half-time but a six-minute hat-trick from Humm after the break saw the Europeans take control.

Humm's first was a stunner - with the striker putting the ball in the top corner from 20 yards in the 47th minute, before heading Switzerland 4-0 ahead two minutes later and producing a tap-in for her hat-trick in the 52nd minute.

Bachmann was next to score, converting a penalty on the hour-mark before notching a fine solo goal a minute later, while her third came with nine minutes remaining after a sharp turn in the box.

A penalty from Angie Ponce, who also scored two own goals, put Ecuador on the scoreboard, although the World Cup debutants have had a dreadful time in Canada after conceding six versus Cameroon.

Australia bounced back from their loss to USA by overcoming Nigeria 2-0 thanks to a Kyah Simon brace.

In a physical encounter, Australian winger Samantha Kerr copped plenty of punishment from her opponents, including an elbow to the jaw after half-time.

"Yeah I was in quite a bit of pain. I got hit on the bottom of the chin and it's kind of like when you get smacked in the nose, it's one of those points that just really hurts and kind of just makes you want to cry," Kerr told SBS after the game.

"I was in quite a bit of pain but three points [is] all that matters."

In Friday's fourth match, reigning champions Japan held on for a 2-1 win over Cameroon, who scored in the 90th minute and had chances to equalise in stoppage time, to advance to the last 16.