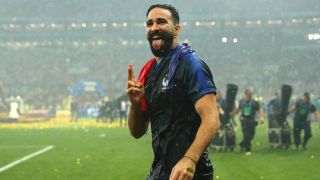 Adil Rami has announced his retirement from international football after winning the World Cup with France on Sunday.

Marseille centre-back Rami made his France debut back in 2010 and has played 35 times for his country.

Despite getting to be a member of Didier Deschamps' squad in Russia, the 32-year-old did not actually get on to the pitch during the tournament.

Nevertheless, he still feels a part of the team's success following the gruelling days of training - and has now decided to go out on a high.

Speaking to TF1, Rami said: "The France team is over for me."

And, when talking to RMC Sport, he added: "Even if I did not play, I had to be ready at all times to play 90 minutes.

"I trained twice a day. The team was huge, I do not have words for that. The atmosphere is extraordinary.

"I have never seen a team from France with such an atmosphere, so much joy, every day, even after the matches, before the matches. It's beautiful."