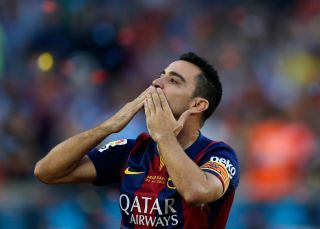 The 36-year-old left Barça for Doha-based Al Sadd in 2015 after making more than 750 first-team appearances for the current European champions, and lifting 25 trophies.

Xavi played under 10 managers during his time at the Camp Nou, including Manchester City-bound Pep Guardiola and current Manchester United boss Louis van Gaal. The playmaker is adamant that he wants to go into coaching too one day.

Speaking exclusively in the May 2016 issue of FourFourTwo, out now, Xavi says: “I have no doubts. I want to stay in football, being close to the pitch. I would hate being stuck in an office.

“I want to do something properly or not at all. My ultimate objective is to coach Barcelona. I’m not hiding that. I want to work again for that house I consider a home.

“Whenever I have 10 minutes to myself, bang – the football goes on the TV. My wife knows that, and she hates football,” he laughs. “I’ll put on La Liga and keep an eye on the Premier League games, too. I’ll study the line-ups, and who’s scored, on my phone.”

Xavi joined Al Sadd last summer, where he signed a three-year deal. It took only 12 minutes of his debut to grab an assist for his new team.

And while the standard may not be able to match that of the Blaugrana, the 36-year-old insists he is still enjoying his football and intends to leave a legacy.

“Football’s still a hobby,” he says. “That’s the secret. If I didn’t have training every day, I’d go and play five-a-side with my mates.

“Listen: I’m playing in Qatar. It’s a professional league – you can’t just coast through games, because everyone is well-prepared physically and the teams are evenly matched – but it’s not like Europe. Tactically, it’s not that well developed. But I love playing football and Al Sadd play a possession game, so I touch the ball over 100 times per game.

Read the full interview with Xavi in the May 2016 issue of FourFourTwo magazine, which also features exclusive chats with Jay Rodriguez, David Bentley and Filipe Luis. Plus, we reveal the Top 50 players in the Football League, travel to Vitesse Arnhem to find out what life is like as Chelsea’s feeder club, recall the history of music in football, hear from Benik Afobe on how to score at any level and ask: is there any point in crossing the ball ? Available in print, on iPad and iPhone from April 6. Subscribe!