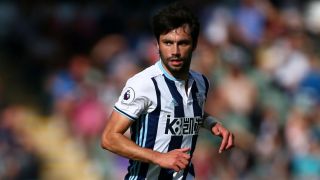 The Argentine, signed from Racing Club in 2012, had been due to see his deal expire at the end of the current season.

However, the club announced on Thursday that he has agreed to a two-year extension, with an option for a further 12 months.

"I'm pleased to sign a new deal with the club," he told the club's official website upon agreeing the contract.

"It wasn't a difficult decision because everyone working at the club, the fans and the players have all made me feel very comfortable since I've been here.

"Hopefully I can continue to play in the team. I'm happy."

West Brom boss Tony Pulis added: "Claudio is a great professional and players like him are vital. I'm happy we've tied him down to a new deal."

Yacob has made 129 appearances for West Brom, with the 29-year-old scoring just once in the Premier League to seal a 1-1 draw with Arsenal in 2013.