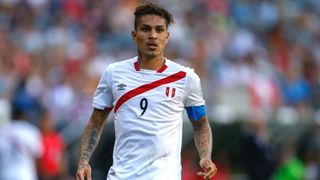 Yoshimar Yotun insisted Peru are still dreaming of Paolo Guerrero featuring at the World Cup despite the star striker's suspension.

Peru will end their 36-year absence from the World Cup in Russia but their joyous return has been overshadowed by Guerrero's drugs ban.

Guerrero is set to miss the showpiece tournament following the Court of Arbitration for Sport's decision to uphold an appeal from the World Anti-Doping Agency (WADA) to extend his suspension to 14 months after the Peru star tested positive for cocaine metabolite benzoylecgonine.

The 34-year-old – who had an initial one-year ban reduced to six months by FIFA having returned a positive drugs test following Peru's World Cup qualifier against Argentina in October 2017 – lodged a last-ditch appeal to Switzerland's highest court on Friday.

"There is a lot of injustice. He is innocent. He said it a thousand times," Yotun told Omnisport.

"Before we played in the play-off [against New Zealand] we said that he would go to the World Cup with us.

"We are convinced [of his innocence] and we are not going to change our idea of us going to enjoy the World Cup with him."

Drawn in Group C at the World Cup, Peru will open their campaign against Denmark on June 16 before facing France (June 21) and Australia (June 26).

It will be the first time Peru – who reached the Copa America semi-finals in 2015 and quarter-finals in 2016 – feature at the World Cup since 1982.

Looking ahead to the World Cup, Orlando City's Yotun – a 71-cap veteran – said: "A lot of emotion and happiness.

"I had no idea how it felt like to qualify to a World Cup, because our country hasn't been in one in the last 36 years.

"I feel it in the streets, when people thank you for being in a World Cup again. It is something incredible. It is something that all of us feel in the national team because we did such a great thing."