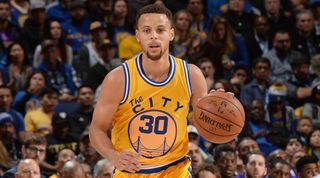 NBA MVP Stephen Curry has admitted a likeness in his style to Barcelona talisman Lionel Messi after helping Golden State Warriors begin the season with a record-breaking 17-0 perfect start.

Curry inspired the Warriors to the NBA championship last term – their first in 40 years. In May, he was voted as the Most Valuable Player, joining an illustrious list including four-time winner LeBron James and five-time winner Michael Jordan.

“I don't know – it's like a chicken or the egg kind of conversation,” Curry explained, after being asked if he is the Messi of basketball. “We both have a creative style, where it's just about a feel when you're out on the pitch or the court.

“I try to do some fancy things out there with both hands, making crossover moves and kind of having a certain creativity and flair to my game. And that's definitely the style that Messi has when he's out there in his matches.”

Much like Curry, Messi is a record breaker. Having won the Ballon d’Or an undisputed four times, the Argentine is also Barcelona’s top goalscorer with 99 more than second-placed César.

Like Messi and Barça's formidable ‘MSN’ attack, Curry has his own partnership with Klay Thompson. The two have been given the nickname 'Slash Brothers' after breaking the record for the most combined three-pointers in a season.

Curry went on to admit how much he enjoys watching Messi play, and spoke of the appreciation he has for the forward.

“I love watching him play. I'm a big fan,” said Curry. “He's just a guy that you never know what he's going to do at any particular moment – when he's on TV, everybody is glued in because, as soon as he gets a touch with the ball, something special could happen. And you've got to appreciate that kind of talent.”