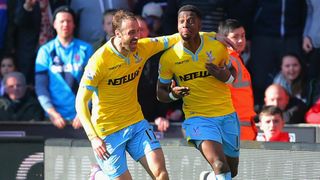 Zaha scored the decisive goal on the stroke of half-time at the Britannia Stadium, with Glenn Murray scoring the other from the penalty spot and helping set-up what proved to be the winner.

It was just Murray's fourth start since returning from a loan stint at Reading, and Zaha said the attacking combination of the two goal-scorers and Yannick Bolasie should have come about earlier.

"I don't know why we did not play me, Yannick and Glenn earlier," Zaha said post-match, as reported by The Mirror.

"We know each other inside out and it's working a treat. I'm buzzing, I got a goal again.

"I'm adding goals now. If you're playing well as a winger no-one really talks about it, but scoring is the main thing."

Having previously come in for criticism from Pardew for negative body language, Zaha said he simply puts on his game face as required.

"I do smile when I need to.