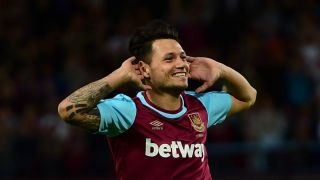 West Ham have confirmed Mauro Zarate has left the club for Fiorentina on a permanent basis.

The 28-year-old travelled to Florence earlier on Thursday to undergo a medical and has now completed his move to the Serie A side.

"I would like to thank David Sullivan and David Gold for believing in me and for giving me the opportunity of playing at such a special club like West Ham," Zarate said in a farewell message on his official Twitter account.

"I would also like to thank my team-mates for the good times we shared and wish them the very best for the future, and especially I would like to thank from the bottom of my heart all the West Ham supporters for their unconditional support and affection."

Zarate joined West Ham from Velez Sarsfield in May 2014, but left the club for QPR on a loan deal halfway through his first season after failing to secure regular first-team action.

He returned to Upton Park ahead of this season and scored in West Ham's 2-0 win over Arsenal on matchday one.

However, he has now left the Premier League side on a permanent basis and will continue his career in Serie A, where he previously played for Lazio and Inter.

Fiorentina have also announced the capture of Tino Costa from Spartak Moscow on loan until the end of the season with an option to make the move permanent come June.

The midfielder, 31, spent 2015 on loan at Genoa, but has moved to the Artemio Franchi as Fiorentina aim to boost their chances of qualifying for the Champions League.