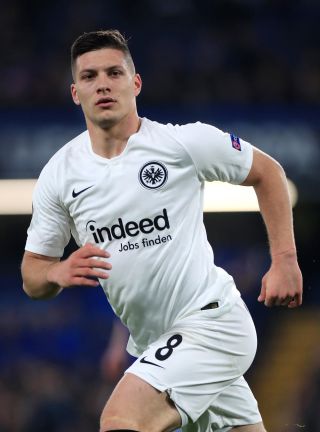 Madrid cruised past Real Zaragoza 4-0 and into the Copa del Rey quarter-finals, but Serbia hitman Jovic’s drought extended to 11 matches.

The 21-year-old has just one goal in 22 Real appearances since his £54million transfer from Eintracht Frankfurt last summer.

👔💬 #Zidane: "We played a great match, a serious match from beginning to end. In every sense."#RMCopa | #HalaMadridpic.twitter.com/bgxTd9Pxgi— Real Madrid C.F. 🇬🇧🇺🇸 (@realmadriden) January 29, 2020

And despite another fruitless goal hunt as Real cruised home at La Romareda, Real boss Zidane still insists he has faith in the highly-rated Jovic.

“He does not disconnect from the games, but I would like a goal for him,” said Zidane.

“He must continue working and the goal will come. He has just arrived, even though it is six months. He is 21 years old. He knows he has to work.

“He knows there are many important players and one day it will come in handy to remember this moment.”

Benzema broke a six-game scoring duck in completing Madrid’s dominant victory, in slotting his 17th goal of the campaign.

Left-back Marcelo toasted his 500th Real Madrid appearance as his side eased through to the last eight.

Zidane hailed Real’s clean sheet as just as important as his side extending their unbeaten run.

“We are fine, what we want is to keep doing things right,” said Zidane.

“It is an example, it is very good,” said Zidane. “But what also should be highlighted is the work of the whole team.

“In the end for a coach I saw a complete match by everyone. We can change players, but in the end they do well. I’m glad for those players who play a little less.”

Zaragoza boss Victor Fernandez hailed the club’s fans for putting on a “brutal” show as La Romareda was full to capacity for Madrid’s visit.

He said: “The fans have been brutal. People have recognised that we have fought with honour and dignity and the last 15 minutes excited me a lot. The mysticism of La Romareda is our hallmark and nobody is going to take it from us.”