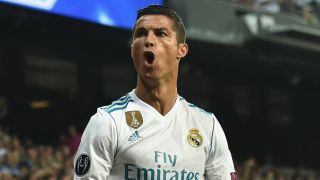 Zinedine Zidane reiterated the importance of Cristiano Ronaldo after the talismanic attacker alleviated Real Madrid's goalscoring concerns with a trademark brace in Wednesday's 3-0 defeat of APOEL.

The reigning Ballon d'Or winner netted the opener inside 12 minutes and added a second from the penalty spot after half-time to kick-start his side's bid for a third straight European title.

Ronaldo's return could hardly have come at a better time for Madrid after striker Karim Benzema was ruled out for at least a month with a thigh injury.

"He [Ronaldo] is the best in the world," Zidane told beIN Sports after the match.

"He is always there when we need him and he always scores. If he was luckier today he could have scored four.

"He is a key player for us [and] I hope he continues in the same vain."

Zidane also talked up the value of Gareth Bale after the Wales winger was whistled by some sections of the Santiago Bernabeu crowd upon his substitution in the 82nd minute.

Bale set up Ronaldo's opener and earned the backing of his coach.

"Bale is capable of playing in a number of positions and on the left he can do a good job too," Zidane said.

"He showed his flexibility. Today we started with Ronaldo and Bale as forwards and then he shifted. I am pleased with the side in general and above all the second half."